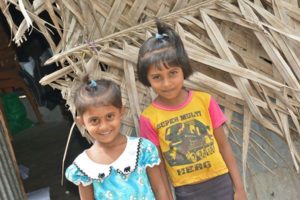 In 2009, the Batticaloa District of Sri Lanka finally witnessed an end to the devastating 30-year civil war that decimated the region and its people. Batticaloa is the fourth most impoverished district in Sri Lanka, and home to the CERI office and the epicenter of CERI programs in the area. Nearly 20 percent of its inhabitants live at or below the poverty line, earning the equivalent of $25.50 per month.

According to UNICEF, nearly one of every five children in Sri Lanka is born with low birth weight and approximately 29 percent of children under five years old are considered underweight. To address this epidemic, Children’s Emergency Relief International (CERI) launched the Food Security Program (FSP).

In 2016, CERI Sri Lanka implemented the Food Security Program in Parathy Kiramam, Kiran Division, one of the poorest areas in Batticaloa, and the sixth village to be touched by the program since its inception. CERI’s initial goal of serving a group of 12 to 15 children quickly changed, however, when 34 underweight children showed up to the program. Two of these young children were Kugasaruthy, age 7, and Satheeska, age 5, both of whom weighed only 27 pounds.

Although they are young, Kugasaruthy and Satheeska know firsthand the ravages of civil war, which had left their father disabled. He was attacked by an elephant while seeking shelter during a shooting. As he ran for safety, he was shot three times. Barely alive, he was rescued and taken to the hospital for emergency surgery. Unfortunately, during surgery, a medical mistake resulted in a severed nerve, rendering the young father’s left arm useless. Unable to work with the use of both hands, it was incredibly difficult to find work and provide for his family.

The girls’ mother, Jeyanthini, 27, also suffered in the aftermath of these tragedies. The couple experienced feelings of inferiority due to their extreme poverty, causing them to withdraw from the outside world. Jeyanthini prohibited her daughters from playing with the other children in the village, kept them from attending school and confined them to their small home.

In spring 2016, Jeyanthini and her family were selected to participate in CERI’s Food Security Program, an opportunity she initially rejected. However, after learning more about the services, she accepted the offer, her heart filled with the hope of helping her family.

During the 12-day program, Jeyanthini learned to cook simple, healthy meals while her children participated in activities at the Children’s Club. After living in sheltered isolation, Kugasaruthy and Satheeska made friends and learned how to play with other children. With each passing day in the program, their energy and enthusiasm increased.

Before long, Jeyanthini started to flourish as well. She began to share stories about her life during the cooking sessions, talking excitedly with the other mothers about the positive differences she witnessed in her children’s behavior as a result of their participation in the program.

“My girls are very happy to take part in the sessions,” she said. “They eat more while they are with other children than they eat at home when they’re alone. I feel an invisible love that surrounds my children, and peace and happiness cover our family daily as the girls return home after the session.”

Jeyanthini began allowing her daughters to play with the other children in the village, as well as attend school.

Participation in the program has also improved the sisters’ health. Kugasaruthy and Satheeska have both gained weight, expanded their social skills and boosted their self-esteem, and overall, enhanced their quality of life. Playing with their peers offered new experiences and opportunities for exploration, learning and development. New toys, new friends and organized games stimulated their growth and capacity, and CERI staff used game times to teach children how to play well together, model positive behavior, and show the love of God through respect for one another and good sportsmanship.

The FSP helped Kugasaruthy and Satheeska grow physically and emotionally in a very visible and profound way. Still, the girls remain underweight in comparison to their American counterparts. While the average weight of an American seven-year old is 49 pounds, Kugasaruthy is approximately 30 pounds and little Satheeska at age four weighed in after the program at 27.5 pounds. Nevertheless, the sisters are on their way to healing, inside and out.

“We thank God for this wonderful opportunity to serve others,” she says, “and to have successfully reached these families most in need.”

Sadly, more than 53 percent of children in Sri Lanka under 5 years old are classified as underweight (calculated as weight-to-age ratio), and nearly 72 percent of local households do not have adequate sanitation or water facilities. Each year, local divisions of the Sri Lankan Ministry of Health in Batticaloa ask CERI to address the nutritional needs of area children through the Food Security Program.

The FSP addresses the acute needs in these villages for healthy food, nutrition education, intentional cooking skills, and information on the importance of proper hygiene and sanitation. The FSP offers Sri Lankan moms the tools needed to confront child malnutrition and common, yet life-threatening health conditions like diarrhea, intestinal worms and infections.

Through the FSP, CERI hopes to reach even more families like Kugasaruthy’s and Satheeka’s, and one day, see Sri Lanka rise above the hunger, poverty and despair through the power of God’s love. Together, with open, loving hearts and a mission to nourish the body and the spirit, CERI staff and the Sri Lankan people transform and rebuild families and communities. 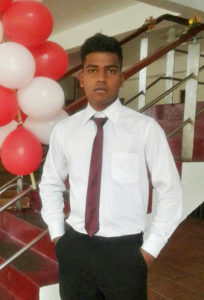 Looking sharp in his black suit, it’s hard to tell Meenojan’s successful demeanor masks the tragic experiences he suffered as a child. When he was just four years old, his mother died of cancer. Shortly after, his father abandoned the family. In an instant, his whole life changed.

I wish to share with everyone that being successful does not depend on your background,” Meenojan says. “From the bottom of my heart, I want to say thank you to CERI who helped me overcome challenges in my life. I extend my deepest gratitude and appreciation to CERI. At the same time, I will never forget my roots and where I came from.

At 13, he entered the foster care program operated by Children’s Emergency Relief International (CERI) – the overseas arm of BCFS – in Sri Lanka, a small island nation off the southern coast of India. CERI’s foster care program serves children and youth like Meenojan in need of family placement, providing case management and a stable home environment, as well as support for food, clothing and education. 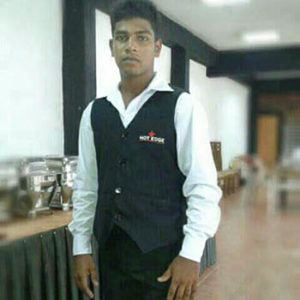 Meenojan’s CERI case worker tried to help him pursue higher education, but Meenojan was unsuccessful in qualifying for school. Desperate to earn some money, he searched for any opportunity to work odd jobs and became a laborer in a local temple.

In his spare time, Meenojan continued his attempts to get into school or a vocational training program. Three months later, with help from CERI, Meenojan was admitted to a vocational school to learn hotel management, where he was recognized as an outstanding student for his hard work and dedication to his studies.

Today, Meenojan is an 18-year-old young man working in one of Sri Lanka’s premier hotels, making a good living to support himself.

By: Leonard Favela
BATTICALOA , SRI LANKA — On December 23, 2014, nearing the tenth anniversary of the devastating 2004 tsunami that claimed more than 226,000 souls and left Indonesia’s island nations and the lives of their people utterly destroyed, BCFS’ overseas division Children’s Emergency Relief International (CERI) received notification of torrential rainfall in Sri Lanka. In only a few days, the rains sparked massive flooding and mudslides across the region, driving thousands out of their homes — and CERI into action.
Since responding to the tsunami a decade ago, CERI has operated a foster care program in two of the hardest hit cities — Batticaloa and Weligama — focused on reuniting or finding safe, loving families for children who are orphaned. In-country staff conduct trauma and loss counseling for children overcoming loss and hardships, and distribute microloans to ambitious foster parents who are entrepreneurs looking to break the cycles of poverty in their families and rural communities.
As the waters rose last month, CERI again found itself searching for children and families through waterlogged streets, and helping many among the 100,000 people affected by floods find refuge and food after their homes were destroyed.
Daily reports were sent back to the states by CERI South Asia National Director Anita Ramesh. Three CERI foster homes were damaged beyond repair, but by God’s grace, every family and child was accounted for. While the organization was able to coordinate temporary housing for families that were displaced, the organization’s goal is to rebuild the homes that were lost.
After flood waters completely receded, many families asked if they could return to their homes and neighborhoods. It is customary for Sri Lankan families to spend the New Year in their homes, performing thorough cleaning — symbolic of purging the previous year, and preparing for a prosperous year to come. CERI staff helped many families prepare their homes for their New Year’s customs, but others’ were too heavily damaged by the flooding. Those families moved in temporarily with relatives or neighbors.
CERI provided all families who returned to their neighborhoods with essential dry goods and water for immediate use. CERI staff asked families to list necessary household items destroyed by the disaster and, thanks to the support of its U.S.-based parent organization BCFS, was able to replace such items immediately.
“I am always inspired by the bravery and resiliency of those we serve around the world,” said Dr. Dearing Garner, CERI Executive Director. “In the wake of such tragedy, hope shined as brightly as it did a decade ago thanks to the prayers and support from not only our Sri Lanka staff but also our many friends and sponsors here in the United States.”
Check out pictures of CERI’s response and recovery efforts in Sri Lanka on Facebook.
For more information about CERI’s work around the world, please visit CERIkids.org.