“When you retire from your regular 40-hour-a-week job, you can’t just sit and do nothing,” says Marjorie Lee, a cheerful, gracious woman who lives in Colorado Springs, Colorado. Marjorie shares this advice as she recalls happy memories of years spent in “retirement” with her late husband Frank Lee.

“Frank was doing that to begin with… and wearing out the carpet between the recliner and fridge. You’ve got to do something,” Marjorie says. “When you give to the Lord, you get back more than you give. You get the blessing, too.”

Their desire to stay active long into their golden years inspired Marjorie and Frank to take the path less traveled and join the Texas Baptist Men serving in volunteer projects across the country. Frank and Marjorie joined their first work crew with Texas Baptist Men in January of 1990.

“We were helping churches get new buildings or additions and other construction jobs. Doing that work helped us ‘old people’ too, because if we had to sit in our easy chairs and twiddle our thumbs the rest of our lives it wouldn’t have helped, and it wouldn’t have been as much fun. We got the benefit as much as the churches did. It was a two-way street,” says Marjorie.

For seven years, Frank and Marjorie joined every project they could with the Texas Baptist Men.

“Frank just loved it! We both loved it. I was still working as a nurse at the time, so he would go to job sites close to home so I could join him on the weekend. It was like a family reunion every month, and we all loved the experience and felt so blessed. The group came from all over the state, between 100 and 200 people. They ran three jobs each month and you’d choose which you wanted to do. About 30 people worked each job, and you never knew which people you’d run into,” Marjorie recalls.

In October of 1997, Frank and Marjorie and dozens of other volunteers drove a caravan of RVs into an open field in a small, east Texas town called Tyler. With the help of these selfless volunteers, lots of hard work, and of course divine intervention, this empty field would soon transform into Breckenridge Village of Tyler, a residential community where adults with intellectual disabilities receive loving care and support that helps them develop physically, mentally, emotionally and spiritually.

“When we arrived in our campers and RVs, it was nothing but a huge empty pasture. There wasn’t a tree or bush or building,” says Marjorie. “We were making our own road and set up our RVs all in a row. We had water and electricity. Then shortly after we arrived, they put up a huge circus tent with picnic tables where we ate our meals and worshipped on Sunday and gossiped through the week.”

Frank and his crew were assigned Cottage #1 – the very first structure at the Village. While Frank worked hard on his cottage, Marjorie and the other women served meals and manned the first aid tent.

“Frank was up in the rafters, helping set trusses and climbing on scaffolding, doing the tape and float on the drywall – loving every minute of it. We had a ball doing those things. By the time we left that job, the cottages were put together enough so we could see how it was going to be setup. The whole group was excited about it.”

Over the next several weeks, the crew erected six cottages, which still to this day house adults with developmental disabilities. While Frank worked diligently, neither Frank nor Marjorie knew his health was rapidly deteriorating.

Sadly, just two months later, Frank Lee passed away from cancer with Marjorie and their three daughters by his side, a few days after Christmas.

The very first cottage at Breckenridge Village had been Frank’s final project, after seven years of faithful service and countless lives touched working alongside his loving wife and the Texas Baptist Men.

For the years that followed, Marjorie felt drawn back to Breckenridge Village of Tyler and recognized it was a special place not only for her family, but for adults with disabilities and their families.

“We sensed right from the beginning what a marvelous concept BVT was,” says Marjorie. “And being in nursing myself, I knew there was nothing like this for adults with mental disabilities and I sometimes pondered, what do families do when they are getting too old and the caretakers won’t be around a long time?”

On a blustery spring day in 2015, Marjorie, her three daughters and other family members all gathered at Breckenridge Village for an interment ceremony honoring Mr. Frank Lee. A tree was planted in Frank’s honor and a plaque lovingly placed where Frank’s ashes were interred.

“I always wanted Frank to go to the Village and be interred there. When BVT said they’d be pleased to do that, it just thrilled me to death. I’ve put this off for almost 18 years since he died.”

Today, Marjorie is still busy at work for the Lord. Occasionally, she goes on short-term mission trips to use her nursing skills, but there are plenty of volunteer opportunities close to home in Colorado Springs. She created several libraries in churches across Texas and Colorado, including the church she now attends. She established a library in a facility for people with physical handicaps in central Texas, and she helps manage the library in the local county jail. Some of the groups she serves have affectionately dubbed her “the book lady.”

Lee Family’s Legacy of Service:  Ever since Cottage #1 was erected by Frank and his crew in 1997, many adults with disabilities have called it home. Since then, BVT has expanded into a thriving, 70-acre campus complete with 6 homes, a chapel, a greenhouse, a vocational center, a pool, a health center, fishing pond, an activities pavilion, and a prayer garden.

Breckenridge Village of Tyler (BVT) is part of BCFS’ global system of health and human service non-profit organizations. BVT is a faith-based community for adults with mild to moderate intellectual and developmental disabilities. Located on a tranquil 70-acre campus just west of Tyler, Texas, our community offers exceptional residential and day enrichment programs to meet the needs of the persons entrusted to our care. We are dedicated to serving a group of amazing people—God’s Forever Children—in a warm, safe, family-like setting that seeks to empower each resident as he or she develops spiritually, physically, mentally, emotionally, and socially in a safe, loving, and closely supervised environment. 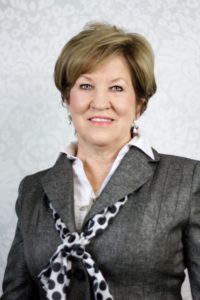 Linda Taylor has been named Associate Executive Director of Advancement at Breckenridge Village of Tyler (BVT), a faith-based, assisted living community for adults with mild to moderate intellectual and developmental disabilities.

“Linda has dedicated 16 years of selfless service and advocacy to the residents at BVT,” said Kevin King, Executive Director of Breckenridge Village. “This new position truly leverages her many talents, combining her compassion and heart for our residents, with her undeniable business acumen to ensure BVT is doing the most good for the families who rely on us.”

Taylor joined BVT nearly two decades ago as a house parent and, four years later, saw a need to raise funds to help families place their loved ones at the Village – sometimes for the rest of the resident’s life. So Taylor pitched the idea to her then-boss to let her try her hand at being BVT’s first Community Relations Coordinator.

For the last 11 years, Taylor served BVT as Director of Development, establishing annual events widely supported by the community that include the “Robert L. Breckenridge Men’s Breakfast,” “Ladies Spring Luncheon,” “A Night to Remember” sock hop and “Christmas in the Village.” Through special events as well as relationship building, Taylor raised nearly $10 million for campus improvements and important scholarship funds that ensured finances never inhibited a family’s ability to obtain the highest quality of life and care for their loved one through BVT.

Now, as Associate Executive Director of Advancement, she will continue to be a liaison between BVT and the community, initiating and growing relationships with current and prospective donors, and sharing the BVT story far and wide. This will include capital expansion projects to build capacity for an ever-expanding need to serve adults with intellectual and developmental disabilities.

“I just feel so blessed to be able to be a part of this beautiful ministry,” said Taylor. “We have a tremendously philanthropic community that has opened their arms to our special residents who, in turn, feel so much love and gratitude toward those who help them call BVT their home.”

Taylor is a member of the Association of Fundraising Professionals and served on the AFP board as Vice President of Advancement. She is a member of Leadership Tyler – Class 25, an organization that values and promotes leadership and engagement among Tyler’s community members. She holds a business degree from the Federal Business Institute.

Located on a 70-acre campus just west of Tyler, BVT offers residential and day enrichment programs to meet the needs of adults with disabilities. The organization – which celebrated its 17th anniversary this year – seeks to empower each resident as he or she develops spiritually, physically, mentally, emotionally and socially in a safe, loving and closely supervised environment.

Breckenridge Village of Tyler (BVT) is part of BCFS’ global system of health and human service non-profit organizations. BVT is a faith-based community for adults with mild to moderate intellectual and developmental disabilities. Located on a tranquil 70-acre campus just west of Tyler, Texas, our community offers exceptional residential and day enrichment programs to meet the needs of the persons entrusted to our care. We are dedicated to serving a group of amazing people—God’s Forever Children—in a warm, safe, family-like setting that seeks to empower each resident as he or she develops spiritually, physically, mentally, emotionally, and socially in a safe, loving, and closely supervised environment.