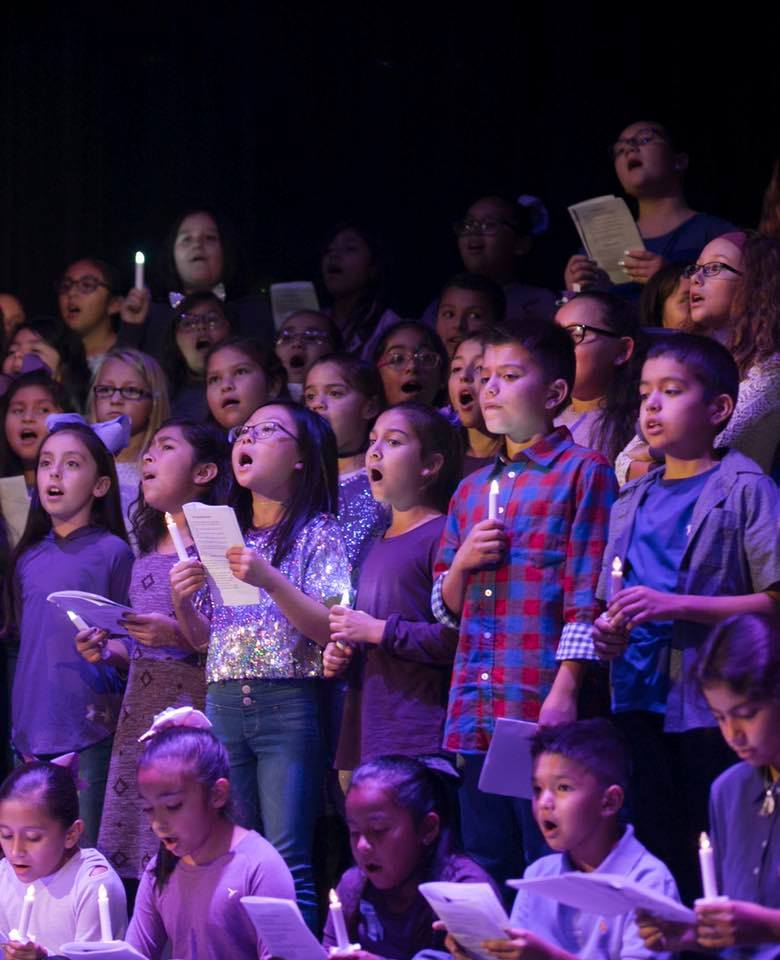 Jhenovia Campbell had served our country in the United States Air Force, earned several promotions, and seen her share of tense situations as a service member. Ironically, one of her most harrowing experiences was when she decided to uproot her life to escape a domestic abuse situation. She chose to leave as a survivor, before becoming a victim.

As she loaded her 2-year-old daughter in the car, Jhenovia replayed in her mind the gut-wrenching decision to leave her teenage daughter behind in Georgia with a relative while she searched for peace and safety. With no more than a few dollars and the clothes they were wearing, Jhenovia and her toddler drove straight through to Texas, choosing Del Rio to seek immediate refuge with a friend.

Jhenovia recounted her recent history and journey for Lopez, discussing how her commitment to her daughters led to her decision to flee a dangerous home environment. As they spoke, Lopez began carefully planning an effective strategy for Jhenovia’s recovery and reintroduction to a safe, stable and normal life.

“She had done her research and learned about BCFS-Del Rio,” recalls Lopez. “She made it clear she was ready for a change. We filed a protective order, contacted law enforcement in Georgia and obtained all the incident reports.”

“I was impressed with her demeanor and calm voice,” Lopez says. “After all the abuse, here she was standing tall and proud. Then it dawned on me that she was a warrior. The fact that she had served our country made her strong. She was eager to learn and not take any handouts. She values hard work and discipline, and I admire that about her, too.”

Through its Special Non-Residential Program, BCFS-Del Rio’s Domestic Violence Program helped Jhenovia find an apartment and provide her a few items to start a new home. She began her job hunt, and as the start of the school year approached, she coordinated the arrival of her oldest daughter, who would begin sixth grade in a new school. Jhenovia learned about additional community resources that helped empower her and her daughters, and she attended support groups and counseling sessions to help process the events of her recent past to recover from the abuse she suffered at the hands of her former spouse.

Through sheer determination, in just under 60 days in new surroundings, Jhenovia reclaimed her independence, fully aware that the scars of abuse, although in check, remain in her memory. She is gainfully employed and caring for her children. As a testament to her resiliency, unconditional love for her daughters, and strong self-image, Jhenovia is living a life free of the insecurity and uncertainty of domestic abuse.

“I knew she didn’t want to ask for help because she wanted to work and get things done with her own hard-earned money,” says Lopez. “Everyone, at some point, needs help. Thankfully, BCFS was there to offer a few important resources, a little hope, and a shot at a new beginning.”

Thirty-two middle and high school girls learned the basics of self-defense at an annual workshop hosted by BCFS Health and Human Services-Del Rio. The workshop was held in observance of February as National Teen Dating Violence Awareness Month. 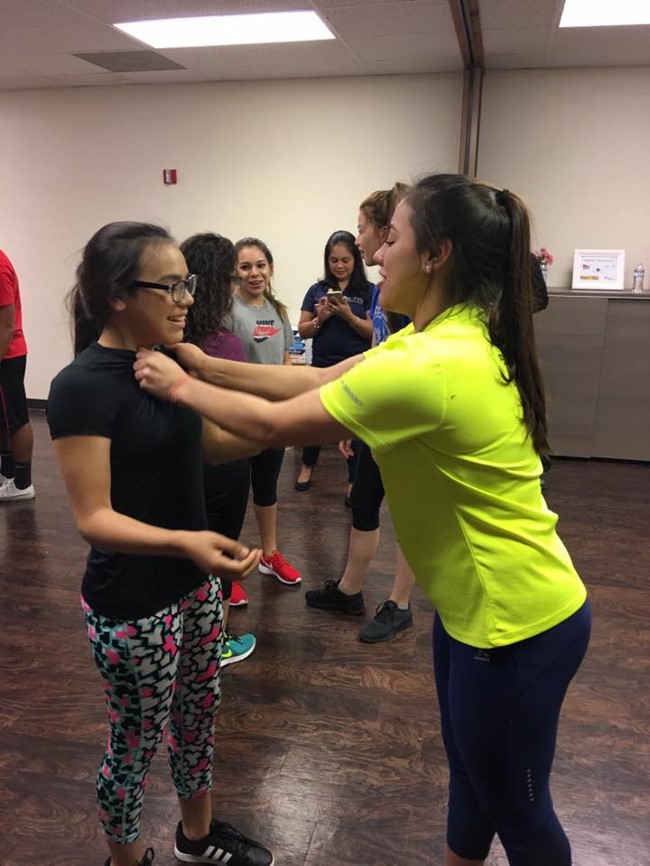 Along with instruction in taijutsu martial arts, the young ladies learned how to avoid a dangerous situation, good decision-making skills when in trouble, and how to react in a life-threatening situation. Attendance at the workshop, which was open to girls ages 12-18, doubled from last year.

According to the National Council on Crime and Delinquency, one in three girls in the United States is the victim of physical, emotional or verbal abuse from a dating partner, and according to the American Bar Association Juvenile Justice Center, violent behavior often begins between the ages of 12 and 18. The self-defense workshop equipped girls with the skills to react quickly to destabilize or disarm an attacker.

The workshop was led by Hector Cruz, Jr., a healthcare professional with teacher certifications in tai chi, gymnastics, the martial arts and yoga. Throughout the workshop, Cruz and his squad of assistants demonstrated different moves that used balance, weight and the body’s pressure points to fend off an attacker. After each demonstration, the girls partnered up to try their newly acquired skills.

“We always want our kids to be safe, but when they’re faced with danger, we want them to be prepared to defend themselves if necessary,” said BCFS-Del Rio Family Violence Specialist Claudia Lopez, who organized the workshop. “Although this workshop was only for middle and high school students, some people from around the community have asked us to host a session for older women. Self-defense really is important for people of all ages.”

BCFS Health and Human Services-Del Rio operates programs to serve those in need throughout Val Verde County, including free counseling and crisis intervention through the Services to At Risk Youth (STAR) program, and domestic violence treatment and prevention through the Del Rio Domestic Violence (DRDV) program.

For more information about BCFS-Del Rio, or to seek help for an abusive relationship, visit DiscoverBCFS.net/DelRio or call (830) 768-2755.

According to the Texas Council on Family Violence, more than 100 women are killed each year as a result of domestic violence. Abuse at the hands of a boyfriend, spouse or other intimate partner has touched the lives of more than 1-in-3 women in the state. Recognizing October as Domestic Violence Awareness Month not only remembers victims – and survivors – but also increases understanding of how to prevent and protect against domestic violence.
“It is commonplace to hear things like, ‘it’s not domestic violence because I’ve never been hit’ or ‘it’s not really domestic violence because he only does it when he’s mad,’” said Raquel Frausto, senior program director for BCFS Health and Human Services (BCFS HHS), Del Rio’s service provider for individuals affected by domestic violence.
“Rather than report abusive actions, people may shy away from the term ‘domestic violence,’ finding it too harsh of a description of what is occurring,” Frausto continued. “Whatever the reason for the confusion, everyone needs to understand the basics of domestic violence and how to respond when it occurs.”
BCFS HHS operates Del Rio’s domestic violence program, offering direct services to individuals in Val Verde and surrounding counties that include access to emergency care, safety planning, and coordination of legal assistance in civil and criminal cases.
On Thursday, October 17, BCFS HHS will hold a candlelight vigil in honor of Domestic Violence Awareness Month. The event, called Breaking the Silence: Speak Up and Be Heard, will be held at the Casa de la Cultura from 7 to 8:30 p.m.
Domestic violence is a pattern of behavior in a relationship used to gain or maintain “power and control” over an intimate partner. Such abuse can be physical, sexual, emotional, economic or psychological. It can include action or threats of action to influence another person, such as sexual assault, stalking or any behavior that frightens, intimidates, terrorizes, manipulates, humiliates, blames or injures someone else. Examples include withholding money from a partner, threatening to kill pets or children, threatening to kill oneself in the event of a breakup or divorce, or constantly belittling or criticizing an intimate partner.
Domestic violence is not limited to gender, class, race, religion, economic status, age or sexual orientation. Whether a couple is married, living together, divorced or dating, any pattern of behavior used to maintain power and control over a partner is considered to be domestic violence.
If you or someone you know is in an abusive relationship, please call the National Domestic Violence Hotline at 800-779-SAFE (7233) or call BCFS HHS at 830-768-2755. All help is FREE and CONFIDENTIAL.