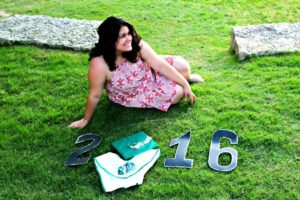 When Alicia Sauceda was just 13 years old, she was thrust into a world she did not understand and could not control. To protect her from an abusive environment, this young, innocent child was removed from her mother’s care by Child Protective Services (CPS). At the time, neither Alicia nor her mother even knew where her father was – they hadn’t spoken in years after he had abandoned his family. Ultimately, both her mom and dad’s parental rights were terminated by the courts.

Alicia was then placed in a shelter for several months, uncertain of her future, while the state worked to identify an agency that could find a suitable home for her. BCFS Health and Human Services-San Antonio’s Foster Care and Adoption program stepped in and matched Alicia with a loving foster family nearby.

While she settled into her new foster home, Alicia was referred to Mike Denning, a BCFS therapist, for counseling services. She was a 13-year-old middle school student when they first met. Over the years, Mike served as her guide and mentor.

“She was very angry and depressed in the beginning,” said Mike. “She was in a good foster home where she remained for several years, but was adamant that she did not want to be adopted. Like most kids, she longed to be with her biological parents, but that dream never came to fruition.”

After exhaustive searches by staff with the Department of Family and Protective Services (DFPS), Alicia’s biological father had finally been located. By then, Alicia was in high school. She remained hopeful that she could be adopted by her father, but when that fell through Alicia was understandably devastated.

Through it all, Mike and his counseling sessions were about the only constant in Alicia’s life. Occasionally, he’d talk about cases he’d witnessed in his career where someone overcame seemingly insurmountable heartbreak, to inspire Alicia to realize her own inner-strength.

“Mike would tell me stories of other young people he helped – how they made it through really tough situations,” said Alicia. “I’d think, it’s crazy how young they were when they went through that, and they still made something good of themselves and they still strive for their best.”

In high school, Alicia began to bond with a classmate and friend who offered her a place to stay, and ultimately something she hadn’t experienced for quite some time: a stable, loving family. Her friend’s family took her in and gave her guidance and support, with approval from DFPS. While Alicia thrived in her new home, her school attendance and grades improved drastically, as well.

After overcoming the grief of the failed adoption by her father, she opened up to the idea that she could build a different kind of forever family. In 2016, she was officially adopted – not in the exact way she’d hoped for as a teenager, but nonetheless, one that was significantly better for her wellbeing and future.

“My best friend’s mom formally adopted me! I’ve known her since freshman year of high school. It’s called an ‘adult adoption.’ Mr. Mike encouraged it… because I’ve been back and forth with different families, he thinks this is the right one for me.”

Today, Alicia lives in Atascosa, Texas with her best friend’s family, who she describes as more like a sister – especially now the adoption has been finalized.

“I had the distinct pleasure of witnessing Alicia transform from an angry and depressed adolescent, into a confident and driven young lady, in spite of the abuse she endured and the adverse situation she came from,” said Mike. “She has the continued support of a new family, and she’s finally hopeful and full of optimism. She aged out of the foster care system as a success story!”

Alicia recently graduated from Southwest High School and plans to attend Northwest Vista College in the fall, majoring in criminal justice. Her dream is to become a crime scene investigator, motivated by her love of science, anatomy, physiology and governmental affairs. Thankfully, this busy, working college student will have her best friend/sister by her side at Northwest Vista College when the two girls start school together in the fall.

Back in San Antonio where it all began, BCFS’ Mike Denning is always ready to provide Alicia support, even from afar.

“He is like family to me,” Alicia says of Mike. “He’s my go-to person now. He’s really excited about me going to school.”

Mike (apparently a Jack-of-all-trades) also happens to have worked as a parole and probation officer for 35 years before becoming a therapist with BCFS. With an experienced criminal justice professional as her longtime mentor and obliging study partner, she’s sure to excel in the criminal justice program.

“He’s offered to help me with my school work,” Alicia laughs, “and I’ll take him up on it!”