At three years old, Iridessa struggled to communicate, to sit still and to follow directions – all difficult symptoms of her autism diagnosis. Her mom, Audrey, was unsure where she could enroll her daughter in a preschool environment that would help her excel. After Audrey met with the local school district, Iridessa was referred to BCFS Education Services Head Start in Skidmore for the 2016-17 school year. 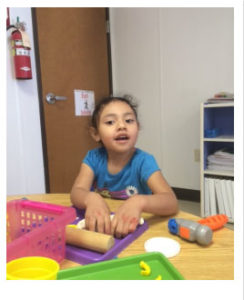 “We spoke with her mom about Iridessa coming into the program,” explains Head Start Director Roxanna Lopez Garza, “and she was apprehensive because she knew Iridessa had never been in a school setting. She worried about how she was going to react in a classroom of other children.”

Head Start promotes school readiness by enhancing the social and cognitive development of children by providing educational, health, nutritional, social and other services to enrolled children and their families.

“It’s the most appropriate setting for a child that age,” says Lopez Garza of the Head Start classroom. “Our students are around other children the same age, our classrooms offer students consistency and of course, our academics prepare them for when they start school.”

With the characteristics of Iridessa’s autism, her first days in Head Start were, admittedly, challenging.

“She would run out of the room, she might throw a tantrum and be inconsolable, and be aggressive,” recalls Lopez Garza. “She wasn’t doing it to be malicious, that’s just how she was expressing herself.”

Iridessa began the school year incapable of using eating utensils or drinking through a straw, she could not sit still with her other classmates and would lash out when her teachers tried to redirect her. Head Start instructors immediately began working to help stem her disruptive behavior. Exciting results soon followed. Halfway through the school year, Iridessa’s instructors reported noticing great strides in her classroom conduct.

“She has learned so much,” beams Head Start teacher Blanca Sanchez. “Her self-help skills have improved, she has a little bit more patience and she can clean up after herself.”

Sanchez also mentions that Iridessa is more accepting of redirection and manages her feelings much better than at the beginning of the school year. And though she is nonverbal, Iridessa will join in the Pledge of Allegiance with her classmates, and she even tries to participate in class singalong time. These improvements were some of the most thrilling for Iridessa, her mother and teachers to celebrate in their attempts to improve Iridessa’s communication skills.

Iridessa’s teachers have also noticed that she is learning the routine of the classroom, a noteworthy milestone for a student Iridessa’s age with her diagnosis.

“At first, she wasn’t able to come sit with us for circle time,” explains Sanchez, “but now when I call her group, Iridessa is ready. She sees me sitting in my chair and she knows that we’re ready to start the day.”

While Iridessa has made tremendous breakthroughs with Head Start, her instructors are anxious to see her make even more progress.

“We would love to hear her using words, and also to see her learn her colors, her alphabet, and a little more of her self-help skills,” explains Sanchez, “because right now, she’s not potty trained yet.”

True to the Head Start model of engaging parents in their children’s education, Iridessa’s mom also works with Iridessa at home on her daughter’s educational goals. A few months into the school year, Iridessa’s mom and Mrs. Sanchez witnessed a memorable, once-in-a-lifetime moment for little Iridessa.

“She told Mrs. Trevino, our supervisor who works closely with Iridessa daily, ‘I love you,’” says Sanchez, “and her mom started crying because she said she had never heard Iridessa say that.”

While Iridessa’s educational needs differ from those of her classmates, Head Start instructors ensure she receives the attention and guidance necessary to keep her on a path toward becoming prepared for academic success as she gets older. In only the first half of the school year, with all the challenges that autism presents her, Iridessa has shown exceptional developmental growth through the support of her attentive Head Start teachers.