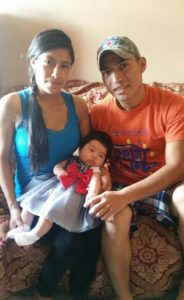 Liliana Caal was born and raised in the small town of Coban, Alta Verapaz Guatemala. After her father died in an accident when she was only 12 years old, Liliana’s mother struggled but did the best she could to raise her and her four siblings. At the age of 22, Liliana married her husband, both of them hoping for a happy and simple life together. They soon found this was not possible as the violence in her town was escalating and local gangs pressured them to join their ranks constantly. But they refused, deciding the only way out was to move to the United States.

They began their journey to the U.S. with Liliana’s brother and brother-in-law. Each of them had only a few quetzal in their pockets (Guatemalan currency the equivalent of less than $1) and the clothes on their backs. They traveled for several weeks by train and slept in the brush whenever they could, always fearful that they would be kidnapped by other gangs along the way. Barely alive, thecouple finally arrived in the U.S.in late November after enduring the cold weather and suffering from hunger and insect bites. After crossing into the U.S., they were picked up by Border Patrol and consequently Liliana was separated from her husband. She was detained for several weeks, during which time she discovered that she was pregnant with her first child.

Upon her release, Liliana found herself alone in an unfamiliar country 1,500 miles away from home. She did not understand what was going to happen to her and no one was able to tell her the whereabouts of her husband. She soon learned that the federal government authorized her to remain in the United States and was taken to live with another refugee family in Laredo, Texas.

It was then that Liliana found out about the Healthy Start Laredo (HSL) program.

After enrolling in the HSL program, Liliana was able to obtain CHIP Perinate coverage and was referred to a medical provider for prenatal services. She attended several group health education classes that encourage healthy pregnancy, and with the support of her case manager, she was also linked to other social services such as the Women, Infant, and Children program (WIC).

In May, Liliana delivered a healthy baby girl weighing 7.2 pounds. Liliana has since been reunited with her husband. Thankful for the support they received through the HSL program, the couple now feels that their future looks promising. 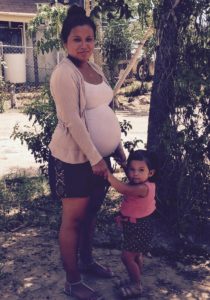 Daisy Cardenas has lived in Laredo since she was 2 years old. She is undocumented but never let that stop her from living a normal life. She has been a hard worker for as long as she can remember. Growing up, her father made a business from buying and selling various items at the local flea market. Daisy recalls how she always enjoyed going to work with her dad and helping him in whatever way she could.

During her first pregnancy, she and her boyfriend worked with her father to make a living and prepare for the birth of the child. For Daisy, that preparation included enrolling in the Healthy Start Laredo program. Through the program, Daisy was able to obtain health care coverage and received first trimester prenatal care and case management. As a result of the support she received, Daisy delivered a full-term 7.5-pound. baby girl.

Now married and pregnant with her second child, Daisy has followed in her father’s footsteps. Little by little, the couple managed to save enough money to buy a vehicle and start their own small business at the flea market. Daisy has expressed pride in her accomplishments, stating, “My dad is a great provider and always ensured we had everything we needed. He has also taught me one of life’s greatest lessons which is to never give up and that hard work always pays off. My family and I have accomplished many goals through determination and perseverance.” 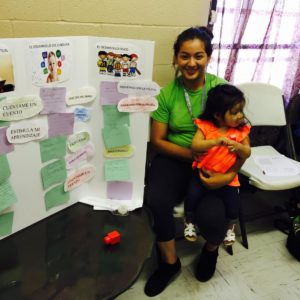 Luisa Sanchez enrolled in the Healthy Start Laredo program when she was pregnant a year ago. When she entered the program, she had been struggling to get health insurance due to a lack of stable housing caused by conflicts with her guardian. With the assistance of the HSL program, Luisa eventually got the coverage she needed and was able to see a medical provider

But the support Luisa received through the HSL program wasn’t limited to medical care. She also credits the program with helping her to develop the skills necessary to become confident and independent. Since participating in the program, she has blossomed and managed to overcome her shyness.

“The BCFS program has helped me during my pregnancy by providing transportation to my prenatal care visits as well as instructing me in classes related to pregnancy and parenting skills. The program has also influenced me to set goals which made me realize that I wanted to continue my education and become a radiologist,” shared Luisa. “I’m thankful to BCFS for the assistance I have received and also for my case manager who has encouraged me to pursue my educational and personal goals.”

Luisa is currently enrolled at Laredo Community College and will soon start courses in radiology. 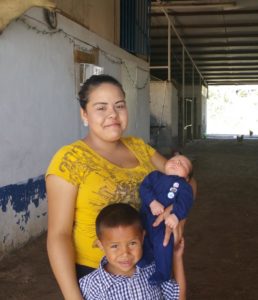 Brenda Onofre enrolled in the Healthy Start Laredo program as a young mother of two young children, with a third on the way. She lives with her husband and two sons on El Primero Ranch, a horse stable where her husband works as a trainer. Brenda estimates that there are around 50 other residents who call El Primero Ranch their home.

Brenda was born and raised in Allende, Coahuila in Mexico. Deplorable living conditions in Allende, compounded by a lack of work or any type of assistance, forced Brenda’s decision to escape to the United States with her husband and their first son.

Although their small home is only five steps away from the stables, Brenda and her husband are grateful to live at El Primero because they have a place to call home and there is plenty of work. Their days start at 4 a.m. as Brenda wakes to make breakfast before her husband goes to work cleaning the stables and grooming and training the horses, while Brenda stays home tending to the family.

Brenda recently gave birth to another healthy baby boy weighing 7 pounds and is grateful to the HSL program for the medical care, case management services, health education classes, and transportation assistance she has received.

“Thanks to the program, I never missed any of my prenatal appointments, laboratory testing, or sonograms but most importantly I thank them because I gave birth to a healthy baby boy,” Brenda explained.

Today, Brenda continues to count her many blessings and thanks God every day because she was given an opportunity to live a happy and healthy life!