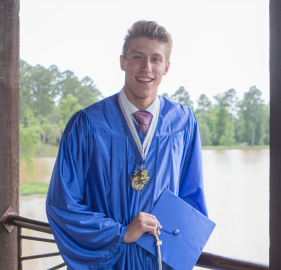 In 2015, The Department of Family and Protective Services awarded Nick with the “Texas Foster Youth of the Year” award. Nick spent six years in the foster care system, and with the help of BCFS Health and Human Services is now attending college with a 3.5 GPA.

Like many foster children, Nick’s story begins with a loss: in his case, when his aunt and uncle gave up their rights to him, leaving him in the foster care system.

“At first it was a difficult thing to process, you know, being left by your family — the ones who say they love you,” Nick said. “It was hard to cope with. But over the years I started realizing that this is probably the best thing that could have happened. It’s been so beneficial—I couldn’t see it going any other way.”

In his years in the system, Nick learned to find familial support in unexpected places. Nick bonded with other young people in foster care, who gave him strength to carry on even in the toughest of circumstances.

“Being in [the foster care system], you hear a lot of different, horrible stories. Some of the stories I’ve heard made me think, wow, I was the lucky one. If they can still be here, I can push on too.”

Pushing on proved difficult, and Nick had a particularly huge hurdle to overcome in the rejection of his biological family.

“[It was] the most difficult thing that I’ve had to overcome, dealing with the rumors and all of the problems,” Nick said. “My aunt and uncle, when they gave me up, they blamed it all on me. That was really hard.”

Luckily, Nick also found a family in BCFS, who helped him land on his feet to transition out of foster care into higher education. Nick reaches out to his BCFS connections whenever he needs something, and they do their best to help him in any way possible.

“BCFS has been like another family to me. I have my case manager, and then her boss — they treat me like one of their own. They’ve had a big impact on me, getting me to college and getting all of my financial aid in order. They’ve been so helpful this whole process.”

“College is a hard time for any teenager,” Nick added, “so it’s really great to have them.”

Nick is currently studying at Tyler Junior College, where he hopes to get his feet wet before attending a larger university. Nick is thriving there, and his observations are typical of a college student: it’s fun, but challenging, and also quite expensive.

Nick’s major is biology, and his current goal is to become a doctor someday. Having experienced hardship himself, this career choice has to do with his drive to help others that are sick or struggling.

“I don’t like the idea that someone’s hurt, and I can’t help them,” he explains of his chosen path. “That really doesn’t sit well with me.”

Regardless, Nick admits that his curiosity for learning knows no labels or borders. “Quite frankly, if someone offered to put me in cooking school I would do it. I have a buddy who’s a welder, and I called him up and asked him to teach me to weld! I want to be a jack of all trades; I want to know everything.”

Perhaps it is this drive for success and knowledge that helped earn Nick the Texas Foster Youth of the Year award. Nick won first the regional award for male youth of the year before achieving the honor of the stateside award. He recounts both experiences as surprising, exciting, and a bit bewildering.

“When I won male youth of the year, statewide, Collette [coordinator at CPS Preparation for Adult Living (PAL)] called me and said, “Hey Nick, I’m really proud of you. Are you ready for this?” When she told him he won Texas Foster Youth of the Year, he was stunned.

“She said ‘someone’s going to call and tell you, so you have to act surprised.’ Sure enough, I got a call. The event was down in Austin — it was really interesting, and really fun, too.”

With optimism, ambition, and BCFS as his go-to in times of need, the future is Nick’s to conquer. He’s stronger for his experiences, and has learned that it’s okay to accept assistance when he needs it, because as strong as he’s become, everyone needs a support system.

“The most important thing I’ve learned is how to use my resources,” Nick said. “I’m not the kind of guy that likes to take a lot of help from people. If I can do it on my own, I want to do it on my own. They showed me that they’re just here to help, whether I want it or not. It showed me how much at times I really do need help—and that was a big deal for me.”