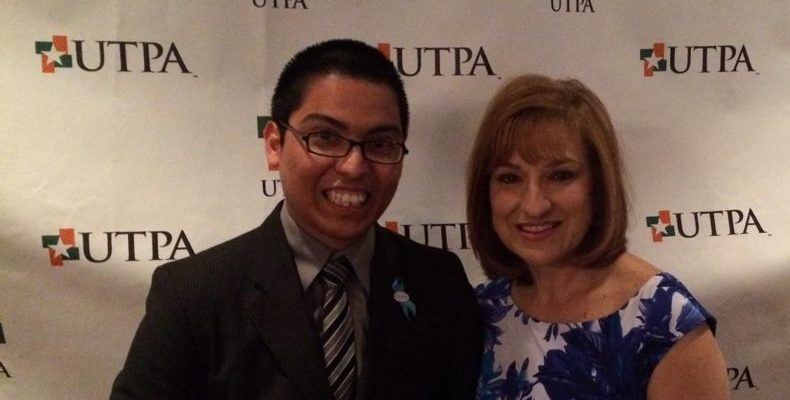 Leroy’s mom worked long hours, and her children were often left alone. A neighbor reported Leroy’s mom to Child Protective Services (CPS) for leaving her children unattended without food. In 2005, when he was 10, Leroy and his brothers and sisters were removed from their home by CPS.

Twenty-year-old Leroy Berrones-Soto sits attentively in one of his undergraduate classes at the University of Texas-Rio Grande Valley (UTRGV). Considering his background and upbringing, to sit in this class, on this college campus, he knows is an accomplishment. In the back of his mind, Leroy knows he’s come a long way.

Leroy was born the second of seven siblings in Rio Bravo, Tamaulipas, Mexico, minutes from the U.S.-Mexico border. By age four, he had endured sexual abuse at the hands of a family acquaintance. His mother and siblings soon left Rio Bravo, headed for the United States. At age seven, Leroy’s younger sister with Down syndrome passed away.

Leroy in “The System”

The family struggled to settle into their new life in the United States. Leroy’s mom worked long hours, and her children were often left alone. A neighbor reported Leroy’s mom to Child Protective Services (CPS) for leaving her children unattended without food. In 2005, when he was 10, Leroy and his brothers and sisters were removed from their home by CPS.

“We had just gotten home, nobody was supervising us,” Leroy remembers of the day a CPS social worker arrived. “We had a long case history, since 2001.”

For the next five years, Leroy and his siblings shuffled through different foster homes, shelters and even some return placements with their biological mother and father. During this time, Leroy’s father was tragically murdered while defending his daughter, Leroy’s sister, from a pair of gang members.

During one of several stints in a foster home, Leroy’s younger siblings were regularly neglected by their foster mother. Leroy felt so powerless to help his foster siblings, that he stopped eating altogether to try to get their foster mom’s attention and end the abuse. His hunger strike caused his health to deteriorate and Leroy was hospitalized for stomach ulcers.

Just after his 17th birthday, Leroy was placed with a new foster family, Mr. and Mrs. Santiago and Susana Lopez, who, he admits, were the most stringent of all his foster care placements. The expectations were clear for Leroy and his housemates in the Lopez foster home: follow the rules.

“They were strict with us, with our education, but they cared, and they provided us with structure and guidance in our daily lives. I had never felt that care from a foster parent.”

This new structure, surprisingly, brought a new kind of freedom for Leroy.

“They were the only foster parents that allowed us to do extracurricular activities,” Leroy recalls. “They took time out of their schedule to take me to school very early in the morning.”

“Sometimes youth think that some of us are just ‘lucky’ to have good foster parents. At the time, I remember fighting with the system, asking the agency to move me from the Lopez home. I’m glad they didn’t. It’s not about luck, but rather a team effort from all parties to gain each other’s trust.”

While Leroy lived in the Lopez home, CPS conducted periodic visits to check on the family. During one visit, Leroy was approached with an opportunity he could not resist.

“The CPS Youth Specialist asked me if I was interested in being on a youth panel,” Leroy recalls. He agreed, and joined a panel of current and former foster youth. Collectively, they provided local CPS staff with their perspective, experiences and struggles while in the foster care system. The panel, Leroy says, was put together to help inspire improvements in the policies and procedures that are part of the daily lives of foster youth.

“Social workers can’t always see what we see, as foster youth,” Leroy explains. “When I started serving on the council, youth would bring up their issues, and we would work toward changing the system.”

While working to help others, Leroy learned of BCFS Health and Human Services-McAllen, in Texas’ Rio Grande Valley. He was 18, aging out of foster care, and looking for some advice on how to prepare for life on his own.

At BCFS-McAllen, Leroy received case management, home visits and help planning his transition into independent adulthood. BCFS-McAllen staff also helped him fill out college applications and choose a career path. As a young adult from foster care, BCFS-McAllen helped Leroy acquire funding to pay for his college dorm through the Education and Training Voucher (ETV) program.

“I was going to be kicked out of my dorm,” he recalls about his housing situation before BCFS stepped in to help pay his housing fees and keep a roof over his head. BCFS-McAllen also gave Leroy some emergency funding to buy food during the Christmas and Thanksgiving holidays when campus cafeterias closed.

Through working with BCFS case workers – along with his experience growing up in the foster care system – Leroy became inspired to choose youth advocacy and social services as a career.

“Leroy is one of our center’s most active youth,” says BCFS Case Manager Deyanira Garcia, “because he’s an advocate for other foster youth. He’s always showing me different resources that he comes across that other youth from foster care can use.”

Answering the Call of Duty

“I want to work with Child Protective Services,” Leroy says. “Since I’ve experienced foster care, I can help clients who are in my same situation, and help understand and solve their problems.”

“I, myself, receive mental health services,” he admits candidly, “and I see other people that need services, and they don’t have the resources, or they don’t know about them. I’d like to work to create something that makes resources available to those who need them.”

The HHSC appointment is one of many accolades Leroy has earned since high school. Among them, Leroy was named “Teen of the Month” by the Teen Toolbox Youth Development SPOTLIGHT, and he was named Youth Representative on the HHSC’s Texas Council on Children and Families. He has presented his insight to lawyers from the Texas State Bar’s Continuing Legal Education (CLE) and has been invited by the Angels of Love Foundation to discuss his experience with foster care system.

In January 2016, Congressman Ruben Hinojosa (TX-15) bestowed a United States Congressional Commendation upon Leroy. Leroy has also received the FosterClub’s Young Leaders Award, an annual recognition of the success of young people from foster care. Leroy has also been selected to participate in the 2016 Congressional Foster Youth Shadow Program, where youth from foster care are given the opportunity to share their experiences with federal lawmakers.

“I am not a statistic”

Leroy has indeed defied the odds. Nationally, according to a report from the Annie E. Casey Foundation, only half the youth who have been in foster care will earn a high school diploma, and only 20 percent of high school graduates will attend college. When Leroy earns his bachelor’s degree, he will be part of the less than 10 percent of youth from foster care who achieve college graduation. He shows no signs of slowing down!

“It’s rewarding, being able to help other teenagers,” he says. “Agencies, departments, people call me to go speak to foster parents or teenagers, to motivate them. That spreads the message, which is also what I want, for them to be successful, and not be a part of the negative statistics.”

“I feel like people are listening to what I say,” Leroy continues, “and that’s important, because for years, I never felt like my voice was being heard.”

After earning a graduate degree in criminal justice, he plans on a long career with Child Protective Services, hoping to be as instrumental in the lives of youth as his BCFS-McAllen caseworkers were for him.

“BCFS-McAllen was extremely helpful for me. I really admire their work,” he says. “Without them, I don’t know what would have happened.”

To learn how to support the work of BCFS-McAllen, visit DiscoverBCFS.net/McAllen or call 956-630-0010.