Starla Huff and Nickolas Wilkerson are two youth from the foster care system who have faced more than their fair share of tragedy and injustice. By holding onto their faith, working hard, and a little help from supportive foster families and BCFS Health and Human Services-Tyler, today Starla and Nick both stand tall – ready for whatever tomorrow may bring. 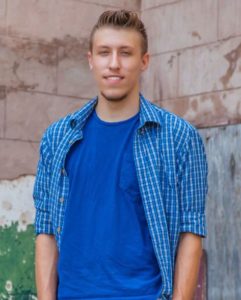 Starla and her three brothers lived with their grandmother for many years while their mother battled drug addiction.“My mom was a user. She did drugs while I was in her presence,” Starla remembers. “Often, she would take me with her wherever she was going.” That experience, along with several instances of abuse, led Starla to her own struggles with chemical dependency and self-harming behaviors at a young age. “I started doing drugs when I was 10 or 11, smoking and drinking, ” Starla says. “I used to cut myself and I tried to commit suicide multiple times, and I was going to a dark place and most of it was because I was on drugs.”

“My family’s not very close, so I didn’t really know any of my family, except for, like, my immediate family, and they never cared for any of my mom’s children because my mom was, like, the black sheep in the family.”

Starla entered the foster care system on her 15th birthday and was moved to Waco’s Trinity Home of Faith, a shelter for youth in foster care. Two months later, on October 4, she arrived at the foster home of Mr. and Mrs. Rohus in a small East Texas town. “I still wasn’t the best kid,” she recalls. “I’d get in trouble at school, I did not have a filter, I said whatever I wanted. I was still smoking.”

A year later, on her 16th birthday, Starla left the Rohus foster home and moved in with her biological father, a decision she now considers one of the worst she has ever made. According to Starla, her father sexually assaulted one of her friends. A month later, Starla returned to the Rohus’ foster home, where she met a new group of foster youth who helped change her perspective.

“I’m so blessed that the foster home still had an opening,” she says. “When I came back, I was the oldest in the house, and so I had a lot of responsibilities. We started getting younger (foster) kids, so I straightened myself out. I told myself that I couldn’t do what I did when I was growing up, that I had to be a role model – so I did.”

Nickolas Wilkerson is an Oregon native who, like Starla, grew up in a family ravaged by the damaging effects of substance abuse.

“My mother and father were very abusive to each other,” Nick recalls of his parents, who both battled addictions to drugs and alcohol. “They couldn’t hold a job, they fought all the time, so we were finally placed with my grandma because my parents weren’t fit to care for us.”

Nick’s grandmother wanted him to have mother and father figures, so she sent him to live with an aunt and uncle in Texas when he was 8 years old. Nick moved to the remote Texas town of Harleton, where he stayed for four years.

“My aunt and uncle adopted me,” he explains, “but my aunt was really abusive. One night, I kind of felt like my life was threatened, so I ran away. It caused a whole ordeal with police, and the neighbors found out that she was abusing me. My aunt and uncle decided that they would put me into the [foster care] system.”

Nick entered the foster care system at 12 years old; at 13, he moved into the Hall family’s foster home. “They’ve been my support,” Nick says affectionately of the Hall family, who welcomed him with open arms and provided the stability and support system of a loving family.

“My mom showed me that through God I could accomplish anything,” Nick says of his foster mom.“They strengthened my religion; it was one of the biggest things they did for me. I was into sports, and they were very supportive of that,” he says. “They were just there for me.”

Soon after Starla’s return to the Rohus’ foster home, Mrs. Rohus told Starla about BCFS-Tyler and the Preparation for Adult Living (PAL) program. Nick first came to BCFS-Tyler when he turned 18, eager to take advantage of programs for youth who aged out of the foster care system.

Starla and Nick completed the PAL program operated by BCFS-Tyler. PAL teaches youth how to set and achieve their goals, create healthy relationships and learn positive self-guidance. From how to write a check to filling out scholarship applications, the PAL program teaches youth the skills needed in the “real world,” and how to succeed on their own.

“They helped with my FAFSA, they set me up with classes, and bought my books,” Nick said of BCFS-Tyler. “From there on, anytime I called them and needed help with college things or if I had a problem that I couldn’t solve by myself, they were there. They’re my support line.”

Starla says the PAL program instilled in her a newfound confidence.“They taught me a lot about self-respect and to accept yourself for who you are.That’s really helped me, because I used to have really low self-esteem and I’ve gotten better about how I feel about myself.”

When Starla and Nick graduated high school one year apart, their case managers fr8om BCFS-Tyler were right alongside them to celebrate.Shortly after graduation they were each awarded a prestigious accolade: the Texas Department of Family and Protective Services’ (DFPS) Foster Youth of the Year award.

The award is granted annually by DFPS to one outstanding youth in each of the 11 DFPS regions in Texas. Nick garnered the award in 2015,and Starla in 2016, marking the first time two youth from BCFS Health and Human Services have won the award back to back, much less both from the small East Texas town of Tyler.

“To win this award, the youth must demonstrate strong leadership skills, motivation, academic excellence and extracurricular involvement,” explains Carla McCalope, BCFS-Tyler Program Director. “Starla and Nick are both very grounded, motivated and determined to make it.”

“Starla and Nick are proof that through hard work and help from supportive families and effective youth programs, good things can happen. We can break generational cycles of abuse and poverty,” McCalope says. “We are so proud of them, and can’t wait to celebrate their next accomplishments.”

Today, Nick and Starla attend Tyler Junior College. Nick is a biology major who aspires to go to medical school. Starla is working toward a bachelor’s degree in nursing, with plans to become a flight nurse in the Air Force.

“I want to finish college, I want a degree,” says Nick, matter-of-factly. “I want to make something of my life. My goal is to be a doctor. If God has another plan, then so be it, but that’s what I’m going for!”

“When my aunt and uncle put me back in foster care, I was angry and I didn’t really have anybody to turn to,” said Nick. “My foster parents that I have now, they took me to church and through that, I found that God had a plan for me; I found faith in myself and Him. My confidence was lifted and my joy was lifted.”

“Before I came into foster care, whenever I had gotten really into drugs, I claimed to be an atheist. I guess because I was so angry,” said Starla. “When I came to this foster home, they were going to church and said I had to come. The minister was talking about drugs and alcohol and basically everything that was my life. I started crying and praying, ‘Jesus, I need help, can you please guide me,’ and He did.”

Although they did not know each other until recently, Nick and Starla both followed similar paths: Both spent time in foster care, turned to BCFS-Tyler for assistance and, one year after the other, they were awarded the Foster Youth of the Year award by the state of Texas.

Too many youth across the United States experience abuse or neglect, and struggle to overcome the emotional and physical scars left behind. But just as Nick said, inspired by the Godly wisdom of his foster mother, we can do all things through Christ who strengthens us (Philippians 4:13), and with God ALL things are possible (Matthew 19:26).