It was forecast to be a particularly rainy Saturday in East Texas, but dozens of athletes and spectators breathed a collective sigh of relief when the weather cooperated for an afternoon of fun-filled competitions. It was finally here, the day of the Special Olympics! Teams from all over Area #7 of the Texas chapter of the Special Olympics donned colorful jerseys and descended on Golden Road Park in Tyler, Texas. 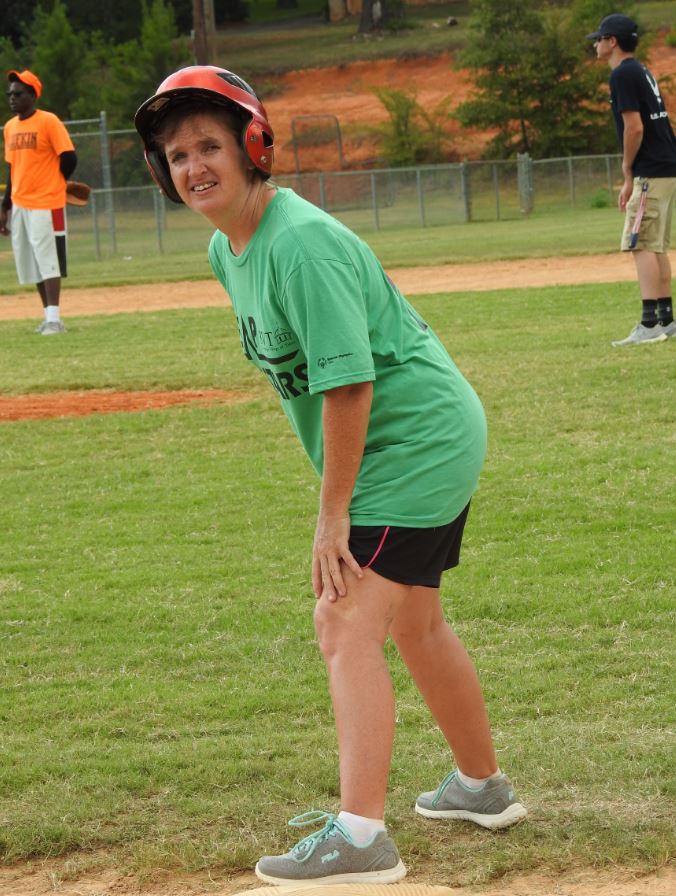 Four times a year, a team from Breckenridge Village of Tyler (BVT) gathers to compete in the Special Olympics. Somewhere between training sessions, team-bonding and practicing good sportsmanship, they each transform into powerful athletes.

Breckenridge Village is a tranquil residential community for adults with intellectual and developmental disabilities. The Special Olympics is just one of many opportunities BVT residents and day program participants have to develop new skills and make lasting friendships along the way.

Between 20 and 30 athletes from BVT play at each competition, with about six BVT staff members by their side on the field, or cheering them on from the sidelines. Their team name: The LEAPstars!

Each athlete picks their favorite sports from a fun roster of options: basketball, track and field, softball, bocce ball, bowling, swimming, golf and even horseback riding.

BVT athletes are given opportunities to train and prepare for the competitions year-round. Bowling is the team’s favorite – they go to the local bowling alley at least once a month, and some even bowl weekly. BVT’s annual bowling tournament, dubbed the Turkey Bowl, is another fun way the athletes prepare. The residents break up into teams and whoever wins the coveted Turkey Bowl trophy gets to display it in their classroom at BVT all year long – and enjoy the bragging rights that come with it.

“Personally, the Special Olympics has been a real eye opener for me,” said Coach Alvin. “When I first started, athletes were participating in just one sport, bowling. Now we participate in five different sports throughout the year. I’ve seen athletes come out of their shells both mentally and spiritually. Being a coach for this special group of people has allowed me to see a different side to them. They don’t allow their inabilities to slow them down or even stop them from trying.”

For the folks that call BVT home, the LEAPstar athletes, BVT staff, Coach Alvin, and the families and loved ones of the athletes, the Special Olympics experience is priceless. Lifelong memories are created, and bonds are strengthened between teammates, and even opponents – all in a fun, safe, inclusive environment.

Meet a Few of the BVT LEAPSTARS on the Team Roster 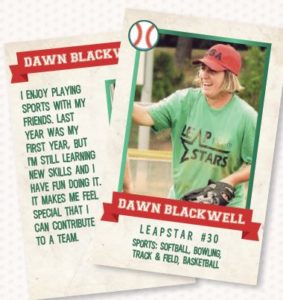 According to Coach Alvin, preparing for the Special Olympics has given BVT an opportunity to teach the residents about the process of goal-setting, and working to achieve those goals. Dawn, a BVT LEAPstar on the softball team, worked hard for weeks before the competition.

“Dawn has a hunger to learn new skills because she wants to be better,” said Coach Alvin. “Off the field, Dawn has been working with her parents on her batting, catching and throwing skills. I see her confidence on the field when she plays. Dawn has consistently asked for feedback and I always reassure her that her hard work is paying off on the field.” 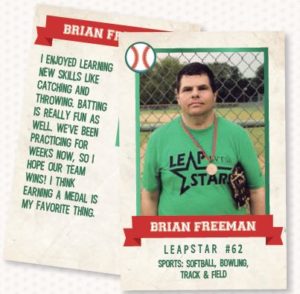 Today, Brian Freeman is an energetic BVT LEAPstar and team player, but he had to step out of his comfort zone to join in the fun. Now, he says he loves playing on the bowling, softball and track teams.

Coach Alvin was pleasantly surprised when Brian said he wanted to try out to join a team.

“Brian is very quiet and even when you speak to him he doesn’t have much to say,” said Coach Alvin, “but when he is on the field he really comes to life. He interacts well with his teammates. I am proud of him for stepping out and trying something new.” 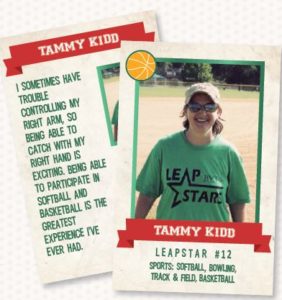 At a 3-on-3 basketball game in Nacogdoches, Coach Alvin was amazed by another LEAPstar athlete, Tammy Kidd.

“Tammy is a funny and caring individual, but on the court she is competitive and relentless! Her competitiveness drives her to perform above and beyond any expectation. Everywhere she goes she meets new people and knows how to make people laugh,” Coach Alvin shared.

Tammy was driving the basketball for layups, stealing the ball from opponents, and shooting from just under the threepoint line. “This was not the same person I saw in practice!” said Coach Alvin, with pride. 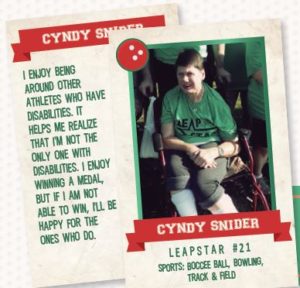 Cyndy Snider, a LEAPstar athlete who has cerebral palsy, won’t allow her condition to determine her mental or spiritual state.

“Cyndy is always looking for the next sporting event she can participate in,” said Coach Alvin. “She doesn’t care if she wins, she just wants to do her best with what God has given her.”

THE OATH OF THE SPECIAL OLYMPICS ATHLETE: “Let me win, but if I cannot win let me be brave in the attempt.”