By Leonard Favela
Featured in BCFS’ annual together magazine

“It’s pretty simple,” begins the Campbell family patriarch, Mark. “You look in James, Chapter 1, and we are commanded to take care of the orphans and children and widows of the world. It’s not an option. God says, ‘this is what I want you to do.’”

With this scripture as their guiding principle, the Campbell family was made whole. Although the divine command sounds simple enough, working through the earthly challenges proved trying for the Campbells, their two biological children, and their adopted daughter, Desiree. Mark and Kathy Campbell already had two small children when they decided to become foster parents through BCFS Health and Human Services.

“We were foster parents for about an hour before we got the call that there was a baby that needed a place to stay,” says Mark. That’s when the Campbells met a sweet little toddler, Desiree.

Desiree was born to a 15-year-old girl, unprepared for the rigors of motherhood and still just a child herself. Less than a year later, Desiree was removed from her mother’s care by the state. During the next few years, Desiree bounced back and forth between her mother and the Campbell household. In an attempt to break the cycle, they tried something new. Desiree’s mother moved into the Campbell home with her daughter. This only lasted a few months, as Desiree’s mom struggled to abide by the house rules intended to keep the home peaceful and stable. After this failed, the “foster home shuffle” resumed for another year.

“The goal is always to reunite the child with the biological parent,” says Mark, “and we agreed that was the best thing to do. But, Desiree just kind of disappeared. We didn’t know where she was, and we found out that she ended up in another foster home.”

The Campbells fostered a pair of sisters during the span of two years without Desiree. After a chance encounter between Kathy and Desiree’s caseworker, the caseworker asked if the Campbells were interested in adopting Desiree. The Campbells began to prepare for the possibility that Desiree could join their family for good – with cautious optimism. But questions remained.

“Would she stay a year? Was that possible?” Kathy wondered. “Because for our kids, it felt like a death in the family with Desiree coming in and out of the house.”

They went to court and presented their home as the safest, most stable place for Desiree. But after an error in court proceedings and documentation, Desiree was deemed unavailable for adoption and would remain in state custody. The Campbells continued to fight for custody of Desiree, and another chance encounter (plus a lot of gusto from Mr. Campbell) caused a breakthrough in the case!

Mark was a member of his local Rotary club, as were all the judges that preside over foster care cases in the county. The judges led a presentation during a Rotary meeting, and when the presentation ended, Mark rose and told the crowd, in no uncertain terms, that the courts were threatening the unity of his family. His rousing, impromptu speech earned a standing ovation from his fellow Rotary members, and caught the attention of the judges.

During this time, Desiree’s mom had visitation rights but rarely came to see her daughter. She missed several scheduled visits – all the while, she vowed that she’d fight for custody as long as it would take. When a trial date was set, nerves set in and Desiree’s mom did not want to appear before the judge. She told her attorney she wanted to meet with the Campbells.

Mark’s voice quivers as he recalls that meeting. “Desiree’s mom said, ‘it’s best for you guys to take her, because I can’t do it.’” Another emotional breakthrough – but more roadblocks stood in their way. In the final phase of the legal proceedings, the family’s lawyer attempted to double his fees to complete the adoption. Outraged and out of options, Mark called BCFS President Kevin Dinnin, who immediately assigned BCFS’ lawyers to their case.

The adoption was finalized in court two weeks later, February 2, 2005. Desiree was officially a Campbell!

In Her Own Words

Desiree, now 16, sits comfortably beside her mom and dad in their living room, where Christian artwork and scriptures adorn the walls.

“I don’t know where I’d be without them,” Desiree says of her mom and dad. “They’re a big part of my life, they’re always there, and I’ll always have somewhere to go.” 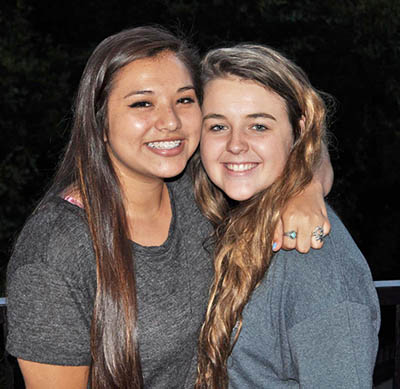 The family calendar is full – weekend getaways, family game nights, soccer, swimming and golf. Desiree now has her driver’s license. By the time she graduates high school, she’ll have her cosmetology license, but in the meantime (license or not) she is the “go-to” hair and makeup stylist for her sister and friends.

She traveled to Central America on a church mission trip to disciple youth in a Guatemalan orphanage. “Last year, I brought someone to Christ,” Desiree says. “They wanted me to sign their Bible. It was a really cool experience.”

In every adoptive family, the parents must decide how best to communicate with the child about their history, their biological parents, and the future of the parent-child relationship. The Campbells decided early on they never wanted Desiree to look back and feel as if she had been “stolen from her mother.” So they determined two things would be key – gratitude and honesty. Kathy and Mark reminded Desiree to be grateful to her mother for helping her have a bright future.

“It would’ve been easier for a 14-year-old girl to make a very poor choice about her pregnancy,” says Mark. “So she did two things for Desiree; she gave her life and then she said, ‘I can’t take care of her and I don’t want her to go down the same path that I have, so here’s another option for Desiree.’ I can’t think of two greater gifts of love that you can give another person.”

Desiree and her biological mother haven’t spoken since the adoption was finalized more than 10 years ago. Desiree is uncertain about the future of their relationship.

“So many things run through my mind, like if I were to find her, would she ever want to meet me back? Maybe her mind has changed and she wants to meet me,” wonders Desiree. “Or, what if I meet her and I’m not what she expected…I definitely, probably would, in the future, want to meet her.”

“The fact that my parents are open with me about my adoption and that they’ve allowed me to ask questions really helped me trust them and grow up and be okay with the fact that I was different, and I didn’t look like them…and they don’t go a day without telling me they love me.”

Desiree dreams of one day adopting a child of her own. With her courageous parents by her side, she’s bound to follow in their footsteps gracefully and prove her father right when he says, “God’s always got a way of working these things out. There’s always a good place for a child.”