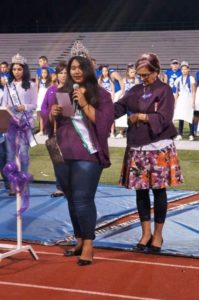 With a shaky voice, a local high school student stood on the football field at Walter Levermann Stadium Monday night, microphone in-hand, and read aloud several names of victims of domestic violence who lost their lives at the hands of their abusers. Behind her, a dozen more young women lined up, each prepared to read aloud additional names. A survivor of domestic abuse stood next to each reader to offer support and an encouraging hand, since it was difficult for some to read the names through bouts of tears.

Hundreds of students and community members gathered in the stands and on the football field for the 6th annual candlelight vigil hosted by BCFS Health and Human Services-Del Rio to honor victims of domestic abuse. The annual event is hosted by BCFS-Del Rio to mark October as National Domestic Violence Awareness Month, and increase community awareness about the devastating impact abuse has on the Del Rio community and the state of Texas.

Nearly 150 victims’ names were read aloud from a list provided by the Texas Council on Family Violence. As each name was read, a student on the football field raised a large white poster displaying the victim’s name. Family members and onlookers in the stands held white candles in silence, honoring each victim.

The football team, cheerleading squad, dance team, Student Council, ROTC, band and several local beauty pageant winners volunteered at the vigil. Over 100 students lined up on the football field in a visually striking display of solidarity.

Abigail Flores, a survivor of domestic violence served by BCFS-Del Rio, shared her testimonial about suffering over a decade of violent abuse at the hands of her ex-husband. She encouraged everyone in the community to speak up against abuse, and show love and support to victims. She thanked God, her family, her pastors, BCFS-Del Rio, and the police and sheriff’s departments for bringing her hope and healing.

“Even though these people think they’re just doing their job, to me, it means so much. These people helped wholeheartedly. Tonight, I want to honor you as well,” said Abigail. At the close of her testimony, Abigail sang the Rascal Flatts song, “I Won’t Let Go” to a standing ovation.

From 2014 to 2015, according to the Texas Council on Family Violence, the State of Texas witnessed a 10.9% increase in women killed due to domestic violence; 119 women in 2014 vs. 132 women in 2015. Across the country, according the U.S. Center for Disease Control and Prevention, every minute, 20 people are physically abused by an intimate partner. And the National Coalition Against Domestic Violence reports that between 21-60 percent of victims of intimate partner violence lose their jobs due to the effects relate to the abuse.

Historic Cooperative Agreement to be Signed

On Thursday, October 13, local organizations that serve domestic violence victims will gather on the lawn of the Val Verde County Courthouse to sign a cooperative agreement forming a Sexual Assault Response Team, or SART. This historic event will spearhead interagency collaboration addressing the issue of abuse, and feature an address by District Attorney Fred Hernandez.

The launch of the SART strengthens the network of local support systems for victims by formalizing the partnership between agencies that provide victims’ services, including the Del Rio Police Department, Val Verde Sherriff’s Department, Texas Department of Family and Protective Services, New Horizons Women’s and Children’s Shelter, the consulates of Mexico and Guatemala, San Felipe Del Rio Consolidated Independent School District Police Department, the Val Verde Regional Medical Center and BCFS-Del Rio. The agreement will be signed at 10 a.m. at 400 Pecan Street in Del Rio.

BCFS is a global system of health and human service non-profit organizations with locations and programs throughout the United States as well as Eastern Europe, Latin America, Asia and Africa. The organization is a national leader in medical sheltering and emergency management and response, providing critical emergency support services to federal, state and local governments. BCFS also provides residential services and emergency shelters for children who are abused or neglected; assisted living services and vocational training for adults with intellectual disabilities; mental health services for children and families, foster care and adoption services; medical services; early education; transitional living services for youth who are at-risk and those in the juvenile justice system; residential camping and retreats for children and families; and international humanitarian aid for children living in impoverished conditions in developing countries.