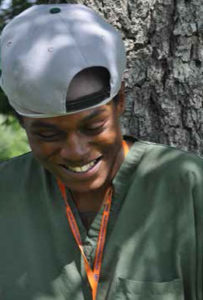 When BCFS Health and Human Services came to me and asked if I would like to be a part of an article, I was – at first – a little skeptical. I don’t know why honestly; I think because I didn’t expect anyone to take interest like that in me. “Why, me?” I kept saying.

I thought about this opportunity for two weeks. How should I share the narrative of how I overcame adversity and became something better than I was before? Looking at my life and the current things I’m facing, I tried to pick the specific event or moment that something clicked for me. Then it hit me… and the creative juices started flowing.

This is how it began. I was homeless. Jobless. And my life chaotic. Here we go…

“I was angry at the world,” said Chris Ramsey, recalling the moment in his life when he faced what would be his breaking point. Ramsey had bounced in and out of foster care since the age of 15. He rebelled as a teenager, masking his sadness with anger and arrogance, which proved to be a dangerous combination that got him in trouble with law enforcement more than once. With a baby on the way, he tried to get back on track. Yet every time he encountered an obstacle, he self-destructed.

“A little bit of trouble in a relationship would put me in the state of mind where drugs were my scapegoat,” he explained.

After breaking up with his girlfriend and couch-surfing in friends and acquaintances’ homes, a close friend pushed him to get help.

When Ramsey walked into the BCFS HHS transition center, he was met by smiling and welcoming faces. The hardened youth wasn’t fooled though. He had had case managers in the past and now he had an attitude toward anyone who thought they could easily solve his problems. However, given his circumstances, he knew he needed to at least play along in order to get some help.

Ramsey was connected to BCFS HHS’ Preparation for Adult Living (PAL) program, designed to equip young adults aging out of the foster care system with the basic life skills needed to live independently. One of BCFS HHS’ outreach activities brought Ramsey’s PAL group to a local recording and radio station. Ramsey was always interested in music and almost immediately he felt a connection with the owner of KROV San Antonio, Nneka Cleaver.

Cleaver gave Ramsey an opportunity to intern at the station, and for the first time in his life, he took an interest in something other than drugs and other questionable influences. Unfortunately it would not last long. A warrant was put out for his arrest for failing to adhere to his probation.

“I did a lot of thinking, reading and talking to old school guys who knew what they were talking about in jail,” Ramsey says with a serious look on his face. “I had squandered a great opportunity and expected that everyone had turned on me again.

“Alone in my cell, angry, crying and questioning myself, I decided enough was enough and that I was going to give my life over to the Lord.”

Initially, Ramsey felt reformed and reinvigorated. He took his Bible everywhere, studying, learning and spreading the Gospel. Then, like always, he faced a setback. His friend kicked him out of the house. Instead of falling back into drugs, though, Ramsey walked back into BCFS HHS’ transition center.

He faced his case manager, but this time he was open to her guidance. Together, they established Ramsey’s “Circle of Support,” a group individuals who were positive influences in Ramsey’s life and invested in seeing him succeed. He was also given a place to live in the BCFS HHS apartments in Kerrville, with the understanding that he had to stay off drugs and apply for school or a job. By enrolling in the BCFS HHS YouthBuild program, he could do both.

YouthBuild is a program funded through the U.S. Department of Labor that helps young adults earn their GED or high school diploma while getting hands-on training to enter the workplace, starting a career in construction, or beginning college. Program applicants must complete a two week intensive interview process called “Mental Toughness” that gauges whether or not a youth has the commitment and drive needed to be successful in the program. But Ramsey did not feel like he fit in with the group, and started fighting with the other youth and staff. On only the second day, he was dismissed from the applicant pool.

“I felt broken down and knew that I didn’t want to be the person I was before,” Ramsey remembered. “My case manager said I needed to learn the difference between my will and the Lord’s will. And she was right.”

A Story that is to be Continued…

BCFS HHS case manager, Kimberley Clayton, enrolled Ramsey in another transition center program called Workforce. He was introduced to the medical field and decided to pursue his education as a Certified Nurse Assistant (CNA). When it was time for him to take his CNA exam, BCFS HHS picked him up at 5 a.m. on a Saturday and drove him to San Antonio for the test.

Today, Ramsey says there is much of his story that is “to be continued.” After earning his GED and passing the CNA exam, he found a good paying job at the Alpine Terrace nursing home in Kerrville. He enjoys helping the patients and sharing his faith with similar souls who seem sad like he once was. Thanks to the life skills lessons he learned in BCFS HHS’ PAL program, he rented an apartment for himself and is responsibly managing his money so he can cover his basic living expenses as well as child support.

While he is not with his old girlfriend, Ramsey lights up when he talks about his one year old daughter. Like all new parents, he says he is excited but still learning how to be a father.

At the transition center one afternoon, Clayton met with Ramsey to talk about his next steps. “College!” he said excitedly. Ramsey has his sights set on becoming a licensed vocational nurse in order to provide for his family. Then, he says, he wants to continue on to become a pastor.

“We started with my prologue, but there are a lot more chapters to come,” he said. Indeed, if he stays on the right track Ramsey will find his “happily ever after.”