Cassie Carmichael’s high school accolades summed up in one word? Impressive.She was offered academic scholarships by several universities, excelled on three sports teams, and worked as a lifeguard at the Baptist Encampment, all while maintaining strong relationships with family and friends. Her story is a triumphant one, but living that story was not always easy. 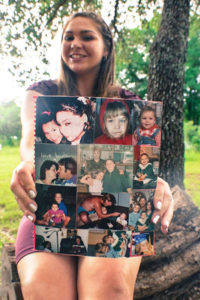 Child Protective Services took Cassie away from her mother, a heroin user, when Cassie was 14. While the separation was painful, Cassie says that her mom was “going down a path I didn’t want to be on.”

For Cassie, the hardest part was leaving her older brother. When Cassie entered the foster care system, her brother had just turned 18 and was not eligible to be placed in a foster home.

At first, Cassie rotated through a handful of foster homes in the Abilene, Texas, area. Since her brother also lived in Abilene, they were able to keep in touch. After a few months, Cassie was placed with the Mellings, a new foster family in Galveston – seven hours away. Cassie admits she had “attitude problems” about the move.

“I wasn’t really okay with being that far away from my brother because we’ve always had a great relationship,” said Cassie. “I kind of fought it and I didn’t want to be there.”

Even while Cassie was admittedly standoffish, the Mellings welcomed her into their Galveston home with open arms and lots of loving patience.

During Cassie’s sophomore year in high school, the Mellings decided to move to Brownwood, Texas, to be closer to family. The move also put Cassie 300 miles closer to her brother.

The Mellings made it a priority to help strengthen Cassie’s relationship with her biological family. When Cassie’s mom and brother came to Brownwood for her high school graduation, her foster parents invited them to dinner and made efforts to get to know them. “They really tried to connect with my family because they know how much it means to me,” she says. 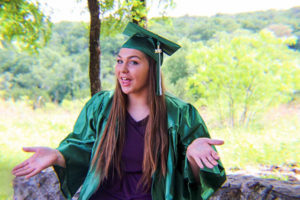 Today, Cassie is a doting auntie to her brother’s newborn son. And now that she lives closer, she can visit often. “Every time I go over there, they make me change dirty diapers,” Cassie laughs. Diapers and all, Cassie loves spending time with her growing family. She enjoys taking her nephew to the park and “just having fun with him.”

The Melling foster home is a busy one by any standard: Cassie is the oldest in a household of eight, with four foster sisters and a foster brother.

Cassie is deeply grateful for her foster parents. “I love them so much,” she says. “They’re super cool and they trust me. They believe in all my goals and they know that I can do whatever I put my mind to.”

Cassie’s senior year of high school was packed with college entrance exams and a full academic workload, but she found time to be a member of the basketball, powerlifting and track teams and work as a lifeguard. Prioritizing her classwork while balancing extracurriculars paid off – Cassie was accepted to three universities, each acceptance letter arriving with an attractive scholarship offer.

Faced with a choice, Cassie signed up for college campus tours, starting with Angelo State University (ASU) and the University of North Texas in Denton. BCFS Case Manager Alexzandra Hust accompanied Cassie on the ASU tour. Cassie noticed most of the other students touring with their parents, but with her BCFS mentor Alexzandra by her side, Cassie wasn’t discouraged. “BCFS is part of my family!” she beamed.

Cassie fell in love with Angelo State and committed to attending ASU in the fall, accepting a $10,000 scholarship for her excellent GPA and ACT scores. She also plans on joining Angelo State’s Powerlifting Club.

With her freshman year of college in full swing, Cassie makes sure her busy schedule includes staying in touch with family.

“My foster mom would always joke with me, saying, ‘I’m going to make you take online classes because you’re going too far away!” Cassie recalls. “It’s great now that I’m going to Angelo – she can come and see me all the time.”

“I’m just trying to go where God wants to lead me. I want to do social work so I can help kids like me. Then, I want to do psychology so I can work in drug rehab and try to figure out everything, from what kind of hold drugs have on people to where I can try to forgive my mom for all the stuff she’s done.”

“I feel like God put me here for a reason,” says Cassie. “Everyone has places where things happen to them in their life, and they don’t know if they’re going to make it. I feel like God tests us, and this is what He did: He put me in this situation because He knows what we can handle and that we can get out of it and make something of ourselves.”